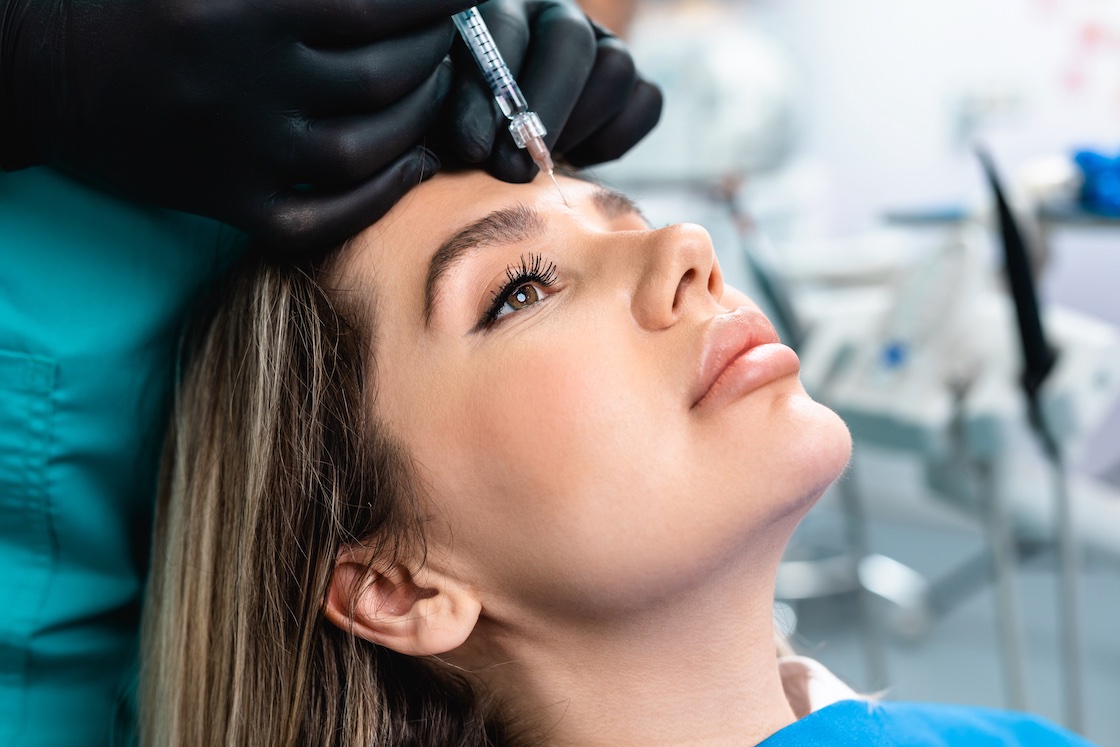 Botox is a prescription-only medication delivered in the form of an injectable. Plastic surgeons, medical doctors, nurse practitioners and other qualified providers use it to help patients treat both cosmetic and health concerns/conditions. Botox is most popularly used to reduce the appearance of fine to moderate facial wrinkles. These, called dynamic wrinkles, are a result of repetitive muscle movement that naturally occurs beneath the skin, as we speak, smile, raise our eyebrows, react to and interact with the world around us. Botox works by preventing nerve communication before it reaches the muscles and causes them to respond to internal or external stimuli. Botulinum toxin, from which Botox is derived, is widely considered the single most toxic substance on the planet. The Botox used by a qualified medical provider could cause death is grossly and intentionally misused, but the most common side effects of the product are headaches and other short-lived pains and discomforts, most of which resolve quickly. The most serious side effects of Botox are botulinum toxin poisoning, and migration of the injected product to nearby muscles, such as those that control the eyelid, causing it to droop for a period of 1-2 weeks.

Botox is a “neuromodulator,” not a dermal filler. This means that unlike Restylane, Juvederm, and similar facial fillers, Botox does not add volume to the face or other areas where it is used/injected. It merely reduces nerve communication in order to prevent muscles from moving.

Since Botox doesn’t add volume to areas where volume loss is causing/contributing to wrinkles, Botox does not treat “static wrinkles.” Cosmetically, Botox is only effective in treating “dynamic wrinkles,” which are wrinkles in the skin caused by repetitive muscle movement.

Botox requires neither local or general anesthesia, but a numbing agent can be used if a patient has trouble dealing with the usually mild physical discomforts caused by a needle, as well as the psychological concerns.

How long does Botox take to work?

Unlike dermal fillers, Botox does not produce immediate results. It takes Botox anywhere from 4-7 days for it to reduce nerve signal communication enough to make a visible difference in the amount of movement and wrinkling in your forehead or other facial areas.

The length of time it takes for Botox to work will also vary from patient to patient. The majority of patients will start to notice the first signs of their Botox working within 2-3 days, and the final signs that it’s produced the full results it’s going to within 4-7 days.

How long does Botox last?

Most Botox patients will find that their aesthetic results last from 3-4 months after getting Botox injections. Some patients (such as those who lead a less active lifestyle, or who have a slower metabolic process), may find that their results last closer to 6 months. For others, including first-time Botox users and people who lead active lives and have fast metabolism, Botox may last only 2-2.5 months.

Probably the most accurate statement on how long Botox lasts is that studies have found it to produce total reduction of patients’ dynamic facial wrinkles for an average of 75 days, which is equal to 2 months and 14 days, or 10 weeks and 5 days. By 4 months after injection, the facial muscles had returned to their pre-injection levels of activity.

How long does Botox last the first time

For first time Botox users, results can last anywhere from 2 to 6 months, and sometimes longer.

Unfortunately, there’s no way to tell exactly how long Botox will last the first time it’s used, but it’ll typically last between

Since everyone’s body reacts differently to Botox, there’s really no telling how long it will last for first-time users.

First-time Botox users that lead an active life and spend time out in the sun may find that their body metabolizes Botox a lot faster than, say, someone who works an office job, remains indoors most of the day (or wears adequate physical and chemical sunblockers—including the right clothing and SPF 30+ sunscreen).

Despite the uncertainties that exist for people considering using Botox for the first time in their lives, most patients who do decide to get it, rate it very favorably and often do repeat treatments.

First time Botox patients who have no idea how their body will react to the toxin and how long it will last can do a small “test run” of the product before deciding whether to make it a more routine part of their aesthetic care.

How long does Botox last in forehead

When used in the forehead, Botox lasts anywhere from 3-4 months, with initial results becoming visible within 2-4 days and full results visible in 7-10 days. After Botox has reached its full potential (7-10 days), the results will last an average of 4 months, but for as long as 6 months. The first time you get Botox in your forehead, it will likely last a bit longer than it does during later treatments.

How long does Botox last around eyes

The ideal treatment frequency for wrinkles under and around the eyes is once every 4 months, since that’s how long the injectable toxin works for there. The results of Botox also don’t immediately “turn off” or “run out,” but, rather, slowly and gradually stop working over time.

That means you’ll have several days if not a few weeks of time during which you can see that your Botox run is coming to an end and that it may be time for a Botox booster.

How long does Botox last in lips

The lips are a common treatment area for Botox as it helps reduce the fine to moderate wrinkles that so often form there. After all, we’re talking on and off throughout the day, and if we’re not talking, we’re smiling, frowning, smirking, chewing or sucking.

That’s a lot of movement.

And not only does that muscle movement lead to wrinkles in the first place, but it also helps break down the Botox that’s been injected to stop those wrinkles from forming.

So you’ll likely have results lasting a bit shorter in the lips than they would in other areas, like the forehead and under eyes.

Botox in the lips usually lasts 3-4 months, with most people getting the short end of that timeframe.

If 3-4 months of relatively wrinkle-free lips aren’t exactly worth it for you, we get it.

And thankfully, when it comes to the lips specifically, you can accomplish many of the same things with dermal fillers that you can with Botox — and dermal fillers last for up to a year.

Instead of stopping muscle movement in order to reduce lip and mouth wrinkles, injectable dermal fillers add volume to the lips to smooth out fine lines and wrinkles, effectively accomplishing the same thing.

(Curious how that works? Imagine a balloon that had lost just a bit of air. It begins to sag and wrinkle in parts, as the latex is large enough to hold more air that has since escaped. If your lips were that balloon, dermal fillers are “the air” that is going to naturally pump them up and plump them out nicely. And since a litter dermal filler goes a long way, you don’t even need to end up with “puffy lips” or an unnatural appearance.)

How long does Botox last after reconstitution

Reconstitution in Botox refers to the fact that the dry Botox particles that arrive in a vial at your provider’s office have to be mixed with a sterile saline solution and shaken up for mixing before they are injected.

Botox arrives dry and is then mixed with sterile saline in order to dilute it and ready it for injection. Botox can’t be injected dry, it has to be turned into a liquid solution first.

Once Botox is “diluted,” (which is more correctly known as “reconstitution”), it’s advised that it be used within 4-5 hours, which is what most providers do.

However, studies suggest that reconstituted Botox can actually last much longer that, and that it will be just as effective.

One concern the study mentions is that repeated drawings from the same Botox vial over the course of 3-4 weeks isn’t exactly sterile.

Nevertheless, if you’ve reconstituted Botox and that patient didn’t show, you can safely consider refrigerating it for up to 4 weeks.

Most practices have policies established for what should be done with Botox in these cases, and it may not be in your best interest as a patient to accept old Botox, which can actually be a red flag for your provider.

The potency of reconstituted Botox is not degraded by subsequent refrigeration for 4 weeks. However, there are definite concerns regarding its sterility, and hence its safety, since multiple withdrawals from the same vial over long periods can introduce bacterial contamination.

BotoxHow Long Does It Last?