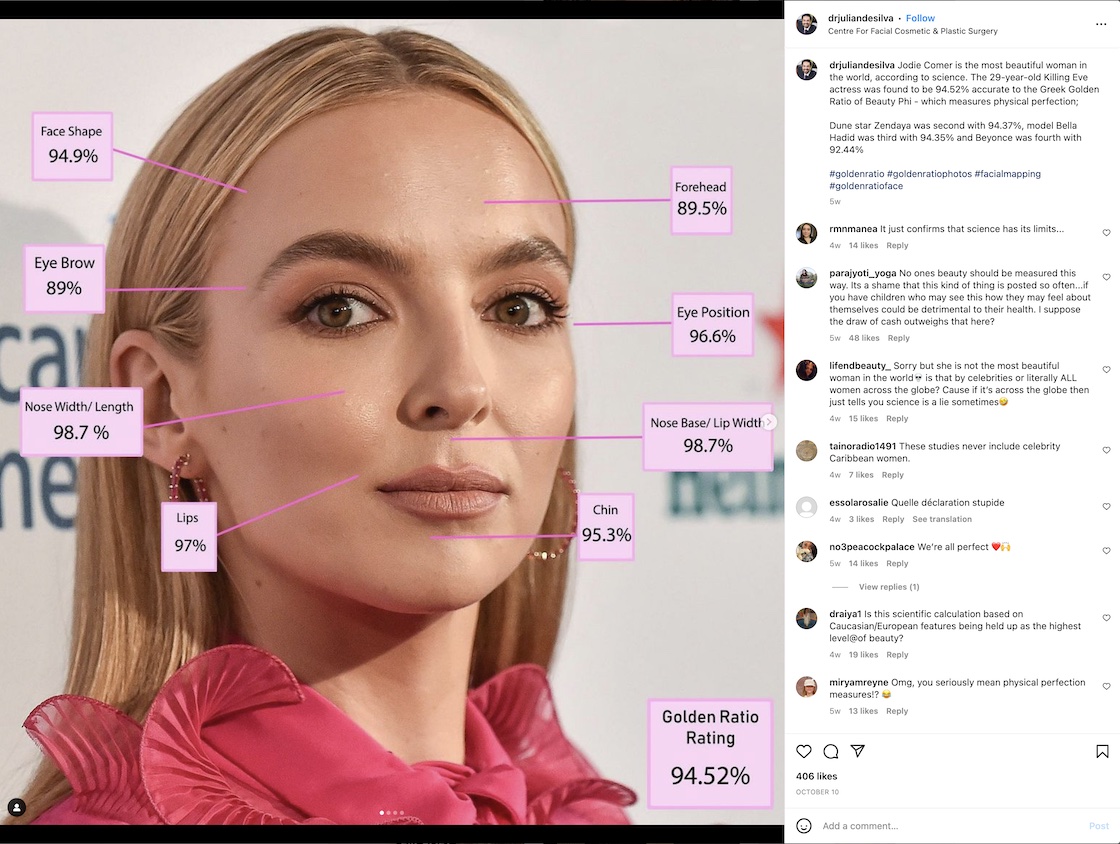 Not surprisingly, all of the women that Dr. Julian De Silva says are the world’s “most beautiful,” are celebrities.

The surgeon received plenty of well-earned flak for his ranking system and the accompanying photographs he shared.

Portraits of each of the women are surrounded by 8 or 9 text box captions displaying the assigned percentage to how apparently attractive each woman’s “face shape,” “eye brow,” “nose width/length,” forehead, eye position, “nose base/lip width,” and chin are — “according to science.”

Averaging out these percentages, the plastic surgeon has then assigned an overall numerical value of the “Golden Ratio Rating” of each woman.

Jodie Comer, he says, is “the most beautiful woman in the world, according to science.” Comer received a Golden Ratio Rating of 94.52%, out of a possible 100%.

De Silva is possibly oblivious to the false ideals that carefully photoshopped images of celebrities can cause not only on youth, but on adults as well.

That’s also according to science.

On BoredPanda, where individual pieces of a story can be upvoted or downvoted by readers, more readers were interested in downvoting the entire article and its premise than in voting on its individual findings.

“Where’s the downvote button for this entire thing?”

Most-liked comment, from reader “TheBordestPanda,” in response to “A Plastic Surgeon Has Used The Golden Ratio To Determine The Most Beautiful Women, And Here Are His Top 10,” on BoredPanda.com

The article has been downvoted 66 times by readers, while the most downvoted of Dr. De Silva’s individual conclusions (as shared in the article) has just 33 downvotes. That spot belongs to Kim Kardashian, who Dr. De Silva had ranked as the 8th most beautiful woman in the world.

“Kim divides opinion but there is no doubt she has a stunningly beautiful face. She scored very highly for the shape of her brow area and and her chin but was marked down for lips and and her overall face shape,” De Silva shared in one of several Instagram posts on his findings.

“This whole exercise is disgusting.”

“Where’s the downvote button for this entire thing?” one reader, “The Bordest Panda,” writes in what’s now the most-liked comment.

“Beauty comes in all shapes and sizes. Just because you have a perfect forehead of eyebrows, doesn’t mean you’re beautiful on the inside,” another top comment reads.

Next up, with 15 likes, “As the saying goes, beauty is in the eye of the beholder. You can measure whatever you want. I don’t find these women to be appealing,” comments reader Hugo Farr.

“No one’s beauty should be measured this way. It’s a shame that this kind of thing is posted so often…if you have children who may see this how they may feel about themselves could be detrimental to their health. I suppose the draw of cash outweighs that here?”

“I disagree that this method is even valid. What makes a woman beautiful are the characteristics that are uniquely hers. The whole is always greater than the sum of its parts,” shares Nikki Sevven.

“this is absolute horsesh*t“

A comment still on the original Instagram posts by the author of the story on BoredPanda shares the probable reason that some surgeons obsess over celebrities.